This is an environment map that is not realistic.

I drew the stars on the moonlight map I made in 1 pixel so they can’t get any smaller. Okay, I try make double the canvas size keeping the size of the stars.

The size of the stars has become smaller, but this looks very annoying. I tried lowering the brightness of the stars.

Now the stars look like particles of dust. I want a more exaggerated expression for the Toon image. I tried reducing the number of stars without changing their brightness.

It’s getting better, but the ship’s front is too dark. I tried adjusting it with Tone mapping, but it was not good because the surroundings just became brighter. When I made the moon moved to front, the sea surface was strongly illuminated and became whitish. Probably because of the low position of the moon. I raised the position of the moon and remade the map.

I think it’s getting better. I process this more with Tone mapping. I set 20 to Vignetting.

The clouds that appear in the background are a cloud object of The Toon Boat set. I loaded Night.duf from Complete Scene of the set. Hide Background Sky object. And, I set my original displacement map to the sea object, and using my environment map. I used other props as they are.

I’d like to illuminate the ship a little brighter, but this time I finished the work as this result.

Now, I rendered this environment map with a sphere which is set titanium material.

The stars look like dust. Apparently my skill still can’t show the stars in Chuck’s eyes 🙁

My friend told me this. Use aluminum instead of titanium. Titanium material has a slightly roughness value.

I applied Aluminum-Polished-Coated to Chuck’s pupil. 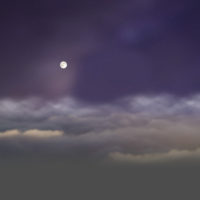