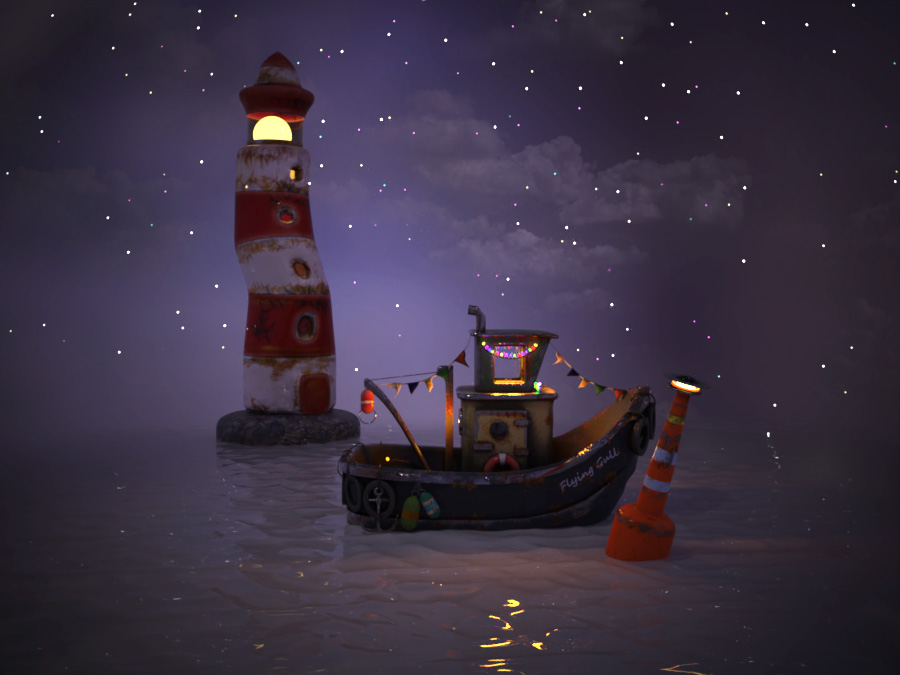 The night view of the sea is a very interesting theme for me. I tried to render for relaxation.

A lovely props set has been put up for sale in ShareCG Store.

The Toon Boat by MysticArtDesign at ShareCG Store

The Toon Boat set also includes a background for the night view. This time I tried using a environment map which I created. I made this before.

I set the mode of Daz Studio’s environment dome to Finite Sphere and made its scale as small as possible close to outside my render screen.

The stars are too big and they look like snowing. Unfortunately this environment map cannot be made any smaller. I need to make a map more than double scale. Before try that, I wanted to make the ripples on the surface of the sea finer.

This set has a normal map for ripples. I will be able to make the ripples finer by tiling the map. But I want to unclear the horizon. This set has a mask to soften the boundaries of the sea. I have to give up tiling because I want to use the mask. I tried to make a new ripple map.

An image of the sea surface.

It’s a complicated pattern. So I searched how the pattern of sea ripples were made.

When Chuck falls to the surface of the water, the water moves around the Chuck. It is said that this ripple tries to go on forever at a constant speed, if there are no obstacles.

But, there are various things on the sea that change the progress of ripples such as wind and land. Now, Jack may fall near Chuck.

It is said that the ripples of the sea are made by overlapping various strong and weak waves from various directions. I tried overlaying various waveforms.

This isn’t what I had imagined. Well, I will try this.

This time I’m going to draw ripples by this image as a displacement map. I think a normal map is suitable for drawing a continuous bumpy pattern of a large object. Because the normal map does not need many polygons on the surface.

Rendering this will make the center look expanding.

The plate polygon now looks like a low pyramid shape. Increasing the SubD level will make the bumps smoother. But when I gave it large value, my Daz Studio froze. I created a plate polygon again which has 50 segments.

This made me notice that the surface of the object requires many segments to draw fine bumps by a displacement map. I applied the sea ripple map I created.

Something different from my imagine. Try set a material like seawater.

After all it is different from my imagine, but I will try using this. Normal maps will be easier to use to save memory. But I decided to use a displacement map this time. Displacement maps can adjust height and low in Daz Studio.

The sea object of The Toon Boat set has just the right amount of segments so I can use it as is.

I am generally happy with this result. But the stars are very big. After all I have to recreate the environment map.