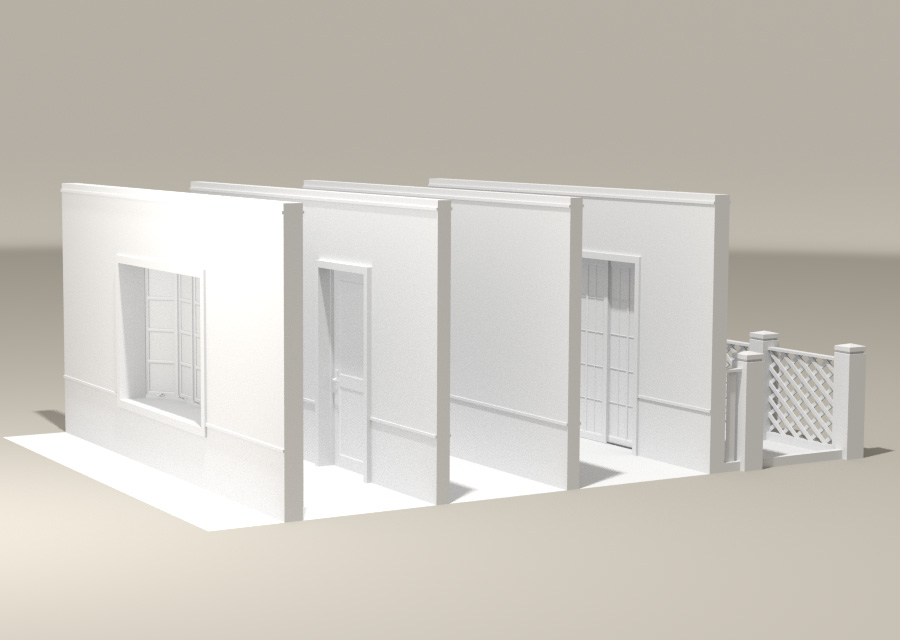 I also finished rigging the Daz Sutdio version of my wall props.

All props of my current work are now available in both Poser and Daz Studio. But, their morphs are diiferent with Poser version. Poser can pull and move characters’ limbs directly. So, Poser case, grab the handle directly and turn it to open and close the window.

I wanted to make the similar morphs in Daz Studio. But for some reason Daz Studio crashed and I couldn’t make them. Then I gave up it. Daz Studio case, use morphs directly under the item to open and close windows.

The walls can be installed in the back, front and left and right of the floor. Usually I prepared position poses of items for such use. But I’m a lazy nature. I sometimes feel it annoying to even look for poses in the library. Genesis figures have control morphs for move their limbs. So I tried to add the wall’s positioning morph into itself.

The wall will rotating and move in all directions by the morphs.

Daz Studio case, they are listed on properties directly under the wall item. They are like full body morphs in Poser. In Poser, I think it’s more convenient to add morphs in a part that is easy to select using mouse pointer. Then, I added those morphs to a child part “Wall” of this wall figure.

Next, I will draw a wallpaper pattern. Sometimes distortions of patterns make me notice a wrong point of the modeling. That may bring my work back to the start. I have already recreated the objects many times for convenient tiling.

Now, did you know? There was a survey by DAZ the other day. In return for answered it, I got a store coupon of 10 dollars. I was looking forward to shopping using it. I bought Filter Forge to make beautiful seamless textures. But it doesn’t seem to be what I imagined. I thought I can edit seams of image tiles with it. It may be possible but I haven’t found any useful tool in it yet. It might be better for me bought a little bunny figure rather than such software because my dull brain hard to learn new operations. A bunny in a snail costume! I bookmarked her for the time being. I just bought DAZ Dog 8 but haven’t used him at all yet, didn’t even installed yet.