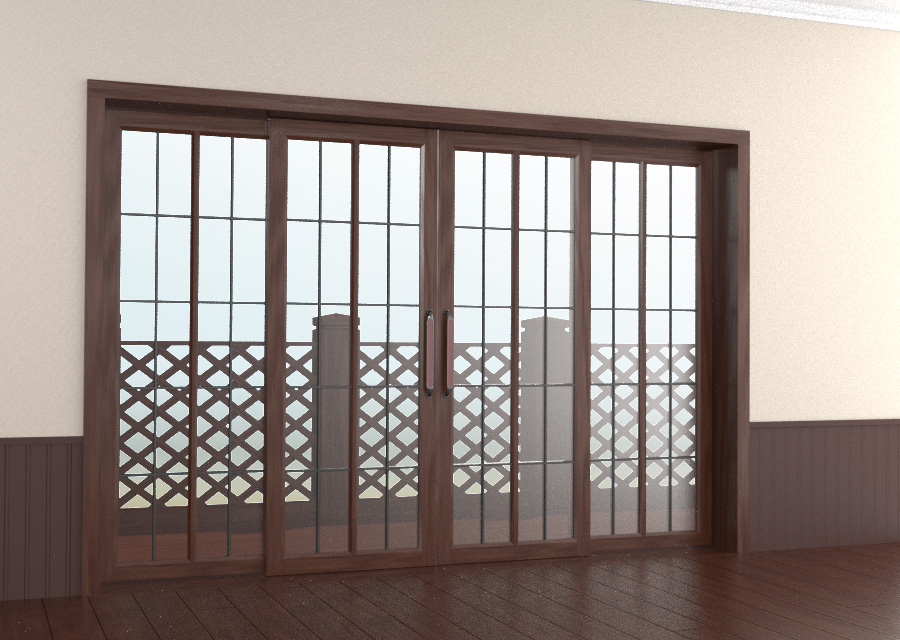 It is a quiet weekend. I was watching a video from the morning.

LIVE EVENT – In the Studio with Daz3D

I am not able to listening English talk. It’s pronounced very much differently from my mother tongue. So I didn’t watch the livestream. I rewound the part I was interested again and again. Some tips that can be used even in the old Daz Studio are introducing. Although I’m not interested in large scene products like the talk show set, but watching a video like this makes me want it. I managed to suppress that desire 😛

I remodeled the wall of my current work after all. Do you know that my House of May has a backside? I have never seen anyone use it. I have never used it myself, too 😀

So I don’t have to worry about the backside of things. Still, I’m uncomfortable looking at a building with only outer walls. Of course there is really such an architectural style. But, I made a base part on the bottom of outer wall.

There is no drainer metal part, but I believe this has improved the appearance as an outer wall. This is the metal part of the drainer.

Well, my taste is unrefined. I like such the everyday and cozy life of ordinary people. I arrange toons there. If you want more graceful scenes or gorgeous them, I recommend looking for products at stores. Now we can get gorgeous sets for a few dollars. Do people now think of it usually? I as a content creator understand the hard works of making them. I think they are an unbelievable price. So please do not get the illegal uploads.

But, I like to enjoy 3D hobby for free, too. My almost freebies I distributed allow commercial renders. You can sell the render images you made to earn your pocket money. But I don’t allow you to extract the objects and textures contained in those packages. Especially textures, they may be copyrights to other sellers. Now, this time I will consider such texture makings.

If my memory isn’t wrong, older Poser couldn’t use large texture maps over 4000px. Now more detailed qualities are required. Hundreds of megabytes of package of one product is not uncommon. I’m worried about my hard disk because the file size of the content is increasing even if the hard disk is in terabytes. So I don’t think about making and distributing such a large package. Texture tiling is required for more minimal packaging.

I bought a lot of resources for texture maps, and also got permission from shops to use them for my 3D texturing. I have also got permission that such my works will be distributed as freebies. But, I can’t include such resources as tiling formats in my package. Although some sellers allow it, but I don’t want do it unless it’s useful for their promotion. 3D objects, textures, shaders, poses, lightings, motions and more, everything has various difficulties to be made. I have to make sure that the original resources are not extracted. Then I tried to draw textures by myself.

It’s a carpet, I bought a cloth and scanned it. This is also not an easy work. When tiling the same image, peculiar parts of the image is repeated. They look unnatural. I drew a checkered pattern to hide them.

This is an example for the peculiar part.

Even with such a messy texture, the pattern will appear if it was arranged repeatedly a lot.

Zooming too much of this looks not good very much. But I have no alternative to this now.

Wooden textures are essential to make a room at least in one I imagine. I thought making the wooden texture is the most difficult challenge. Do I have to scan any wooden board? But the real wooden boards have peculiar patterns. I searched the internet and found a nice tutorial. This is a Japanese video, but Photoshop users will understand what he is doing.

Thank you very much for the tutorial! I’m sorry, I don’t create any social media accounts so thank you here. I learned this method, added more process. And, I made a seamless image map at last.

Do you think this is just mottled patterns? I am happy with this result.

I prepared a dark color, too.

Next I need wall textures.

I can also make wall and wallpaper patterns with Photoshop’s texturiser. I made a little larger image and processed it to erase the peculiar patterns.

I like to see texture maps and colors completely change the mood of objects. And, additional props will also help create different moods.

Suddenly I had an idea, I added House of May’s curtain to the wall.

Its size did not fit to the window. It seems to need double curtains.

Making lots of color variations and items will makes Daz Studio work harder. And, joints control morphs created in Poser will not work in Daz Studio. I would have to make the bar hinged window’s opening morphs in Daz Studio again. I’m not good at repeating the similar work. So I often gave it up at this step.