I must apologize to the owners of Scampixie. A good idea doesn’t occur to me about a Pixy’s dress, yet. And, I’m sorry. I was stopping making of Pranx Pixy because of playing with Poser9. I am interested in “Subsurface Scattering” of Poser9. Because I am thinking about a PixySkin for Pranx. So, I tried to make a new character of a Poser human. You may have been disappointed. I chose M3.

Probably the outstandingly useless contents in my shopping are M3 and his items. I don’t dislike a men who has a heavy-jawled face and a hooked nose. But, those features show me only M3 on every M3 characters. He is hard to use in my work because he resembles my dead father a little. When I loaded M3 in my Poser stage, I used to think “Father, I’m sorry”, and deleted him soon. In that way I hardly used M3.

I tried to make his jaw small using the M3’s Head Morphs at first. After all, I added the new morph targets because they are insufficient for my expectations. The line of his new jaw isn’t so smooth. But, does he look like M3?

I have the skin resources for V4 and M4. But I can’t use them. The almost merchant resource has use restrictions. Resource of V4 must be used only for a character of V4. And I may not distribute textures using those resources as a freebie. I decided to make skin textures by hand-painting. I must draw the skin for Pranx by hand-painting sooner or later. Thus this became far from a realistic skin because I didn’t use any photograph at all.

Now, I tried new shader settings at once.

Why will the results of DAZStudio become like these?
Perhaps it is result of my rude settings of the lights. The skin using Elite Human Shader looks soft than one which isn’t using it. 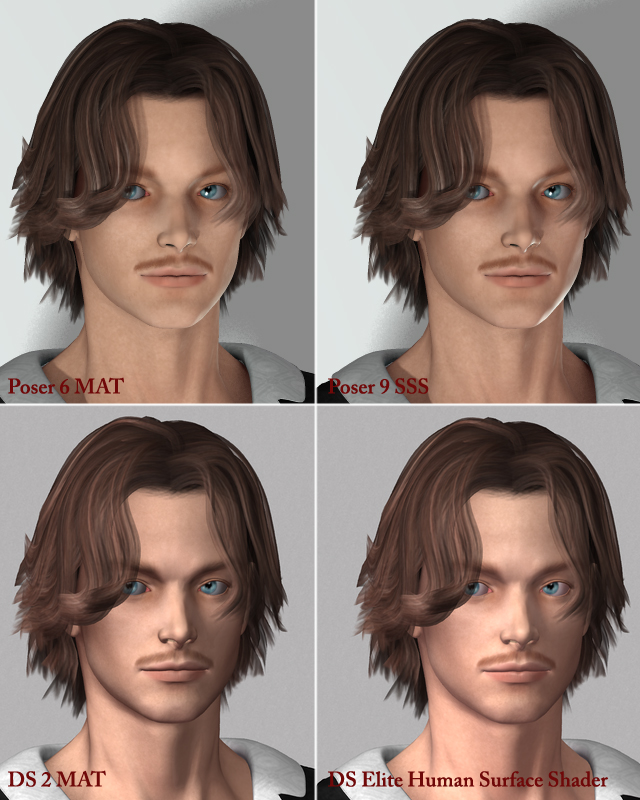 The luster of the lips is strange a little. I may modify it.

Meanwhile, I’ve just hit upon an idea about a dress of Pranx Pixy.