EG Boots for Sadie and Sam

These are the conforming footwear for Sadie and Sam.

I know, the item for Saide was downloaded every day by someone on this website. But I won’t be able to make a new item for her within this year.

These boots were made for my friend’s request at last year. They were items for Aiko3 nad Hiro3. These are refit version for Sadie and Sam. I forgot the uploading of them.

I added 2 Mat Poses into this package this time.
And more, the Mat poses of Aiko3’s same boots are available with them.

I purchased the Large Village Set and the Hair Stylz for Sadie at 50%OFF sale of 3DU. Though spec of my computer can’t stand up to a product of a big scene, this set was arranged with the minimum polygon. Good job! 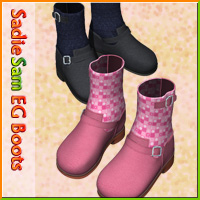 EG Boots for Sadie and Sam